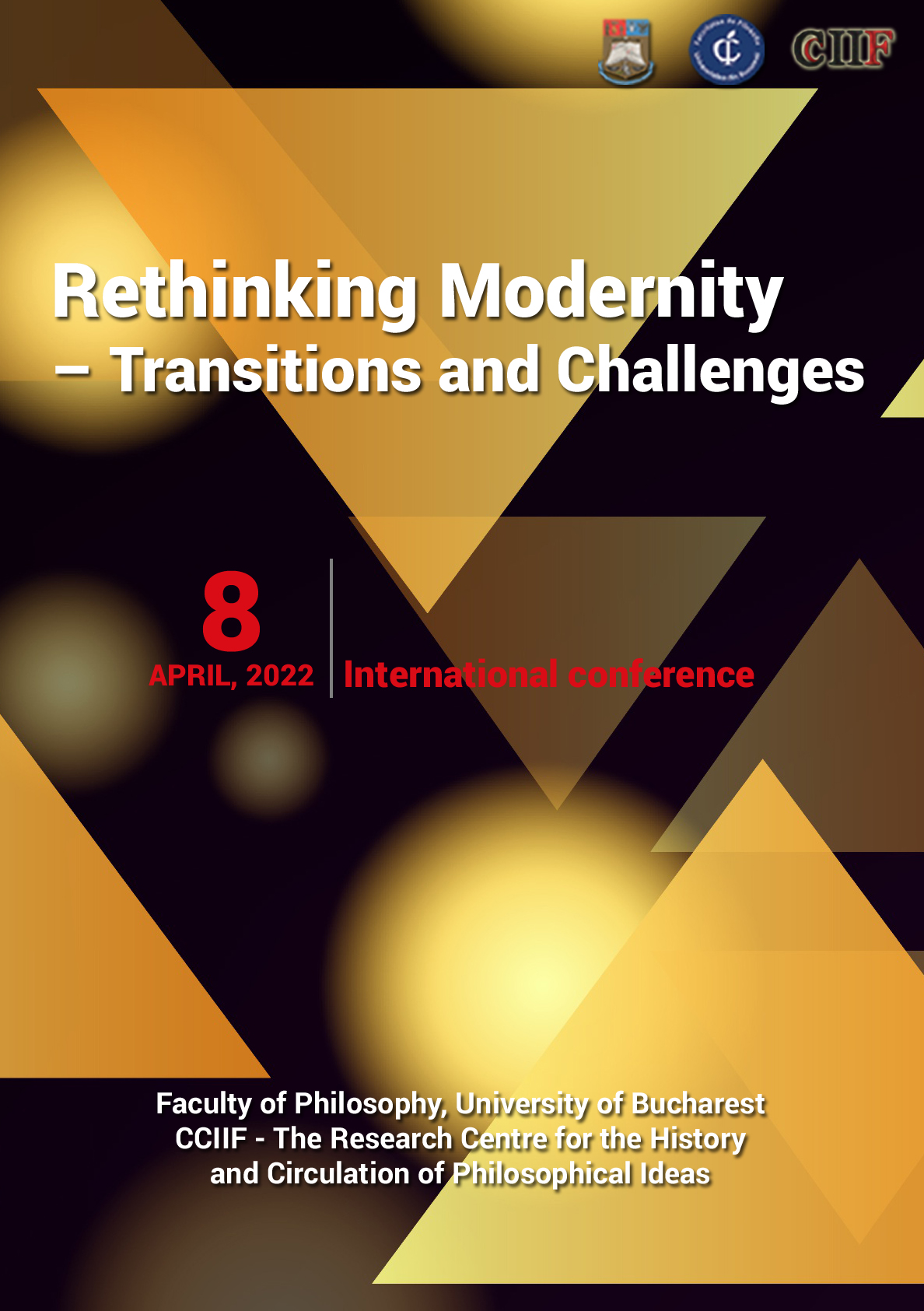 Theory of Precedent in Arts. The Kuhnian Roots of Hancock`s Radical Hermeneutics

Brentano`s view on the positive character of modernity

Life, Existence and the Abyss Between Them – Questioning the Incommensurability Hypothesis

A critique of modernity and postmodernity inspired by Kant and Foucault

Social and artistic turns of modernity and postmodernity

Alternative and Transitive Modernities: A Critique Inspired by Eisetstadt`s Theory on Multiple Modernities

Artistic Modernity and the Representational Theory of Art

The conference will be held online.

According to the general historical perspective of philosophy, modernity refers to a large period of time that has its beginnings at the heart of the Renaissance and the age of Cartesian rationalism. At a first glimpse, modernity has been deeply rooted on the principle of subjectivity as the source of knowledge, senses, wills and actions. Therethrough, modern philosophy consecrated the perspective that the subject, depicted as the creative force capable to secure the order and the structure of knowledge – might perform cultural, social and political actions by engaging ideals prescribed both by the power of reason – for Early Modernity – and by the association of intellective and sensitive capacities – for Late Modernity. However, this rigorous and systematic approach of modernity became later on complicated, suffering certain transitions and amendments raised especially by Nietzsche’s and Heidegger’s philosophical works, challenging “modern theories” to embody a new way of thinking for which traditional “fundaments” should be absent. This new understanding which became symptomatic for postmodernist philosophers considered modernity as:

However, as Rossi claims in his Comparison between modern and postmodern ideas (1989), we cannot tackle the multiple understandings of modernity and its cognitive approaches without evaluating the impact of Bacon’s “idols”, that reflected, in the spirit of the beginning of modernity, reductive and illusionary images. In fact, debates referring to the use of reason, the complexity of the subject, the ambiguity of sciences and the contribution of technology to the new spirit of our era are not “dogmatic”, as postmodernism rather claimed. Such debates reflected a deep awareness of the historical and social continuous dynamics that created multiple – and sometimes, contradictory – conditions for different philosophical traditions, that have not been excused of transitive processes, conceptual challenges and critical clashes, complicating any hermeneutical attempt of deconstructing modernity as a whole (as Derrida or Gadamer rightfully observed). Transitivity capacitates not only cultural realms, values and norms, but also logical relationships that engage core-notions such as identity, equality, temporal succession, spatial movement. These transitions affect the power of discourses and propositional knowledge to prescribe the norms and values of truth.

The linguistic analysis has been challenged to address those changes that take place between an active and a passive propositional knowledge. In the generative grammar of Noam Chomsky, transformation is an operation capable of projecting a syntactic structure in terms of another syntactic structure. As communication has been reshaped, spirituality faced, at its turn, new milestones, partially impacting the rise of capitalism and the ascetical value of work, as Weber would argue. Religious modernity reflects the Christian heritage facing modern andcontemporary manifestations of culture and science, whereas the Jewish modernism of the 19th century accelerates social and cultural changes of modern European societies.

As Early and Late Modernity dispute their authority on different ideologies – Rationalism, Enlightenment, Romanticism – and cultural revolutions – from which the Renaissance and the Rise of the Protestant Reform are the most notorious – artistic modernity and the 19th century confront the rise of authoritarian regimes and the effects of the Industrial Revolution: Baudelaire, in the name of artistic modernity, and the tradition of the Frankfurt School, in the name of post-industrial societies, are the most reputed figures that explained this particular historical time.

Last, but not least, this social and political dynamics reframed the centres and peripheries of the modern world. Imm. Wallerstein indicated the role played by economic processes in creating the system of global economy which is still active nowadays and which is based on a complex balance between states of the centre and those belonging to the periphery. This system is dominated by the extension of a central influence that creates a pole of trends, values and beliefs that are widespread progressively by engaging mimetic reactions of underdeveloped communities facing the success of progressist societies. Modernity overcomes, therefore, a powerful wave of Western commitments that created the idea that modernity has, by all means, an Occidental paternity, and a holistic trend of centralising and uniformalising lifestyles, that made possible globalization.

Taking into consideration such aspects of transitions and challenges addressed to modern thought we invite you to take part at the international conference Rethinking Modernity – Transitions and Challenges. Participants are welcomed to submit papers that originally and creatively address topics from any philosophical area: Practical and theoretical philosophy, philosophy of culture, philosophy of art, ethics, aesthetics, philosophy of religion etc.

Considering the impact of the COVID-19 on education, philosophical trends and social challenges, we invite scholars and researchers to submit papers to a special panel on Modern responses to pandemic challenges.

Deadline: Participants are welcomed to submit the applications (abstracts of 300 words and a short narrative CV) by the end of 20th February at cciif.fil.unibuc@filosofie.unibuc.ro Evaluation results will be communicated by the end of February. The conference is scheduled on April 8, 2022.