Press Release: What We Think About When We Think About Soccer? A Philosophical Talk on Football, Power and Competition with Professor Simon Critchley 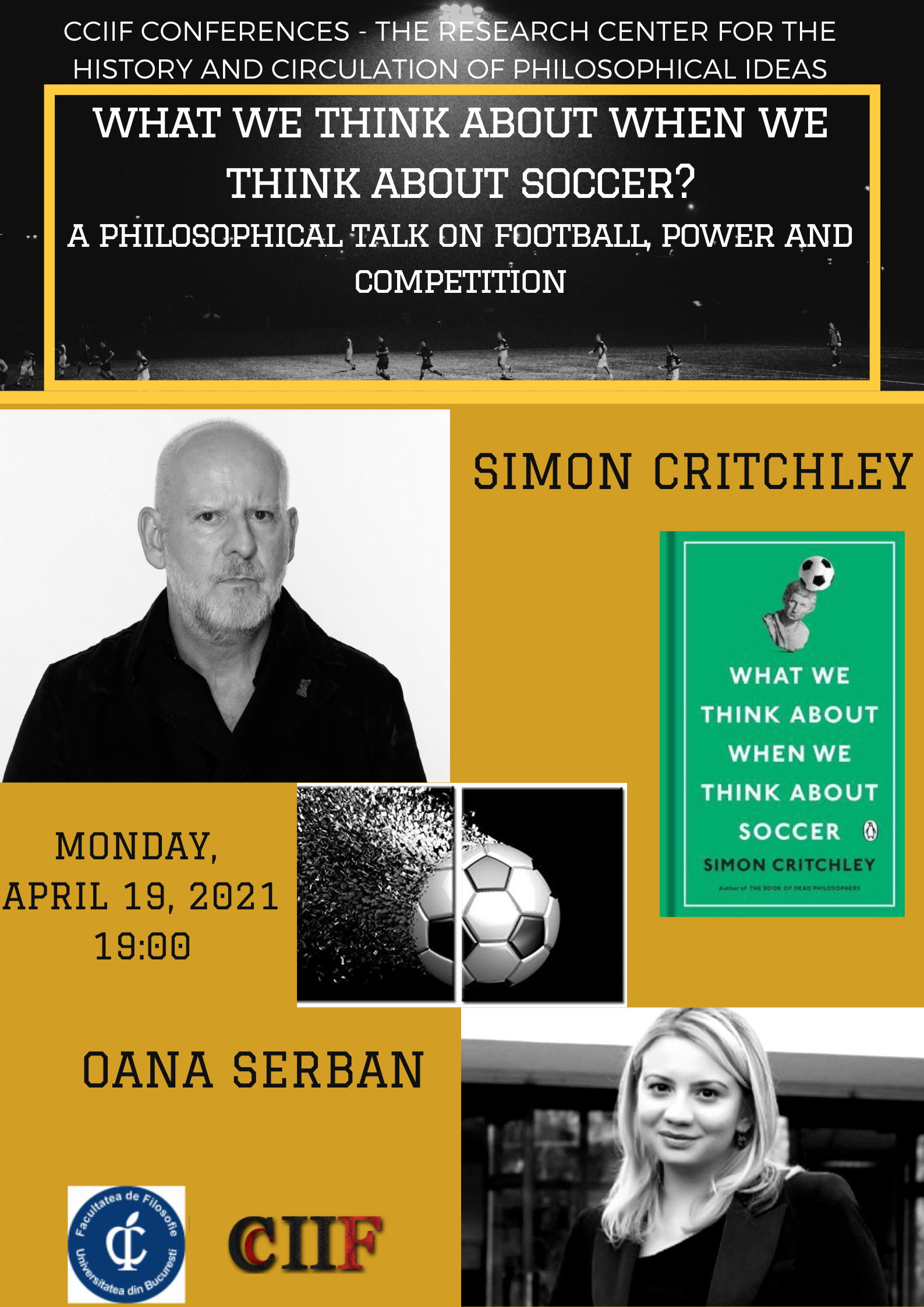 The CCIIF Conferences – The Research Center for the History and Circulation of Philosophical Ideas, subordinated to the Faculty of Philosophy, University of Bucharest, is pleased to announce that the special guest of this year`s cycle of lectures-interviews is Professor Simon Critchley. The dialogue is occasioned by a large interest of our philosophical community towards one of his last books, devoted to “a poetics of football”: What We Think About When We Think About Soccer (Penguin Random House, 2017). 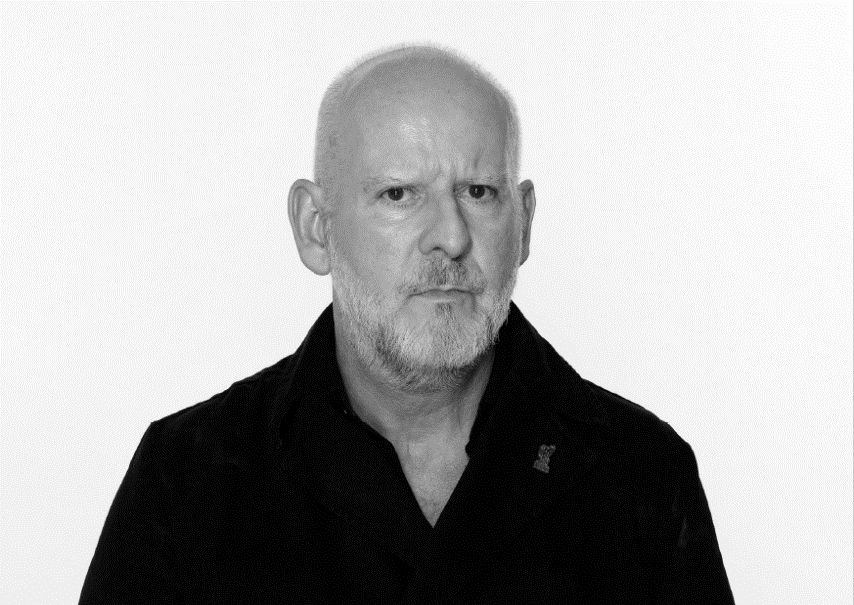 Simon Critchley is the Hans Jonas Professor of Philosophy at the New School for Social Research. His work engages in many areas: continental philosophy, philosophy and literature, psychoanalysis, ethics, and political theory, among others. His most recent books include The Problem with Levinas and ABC of Impossibility, though he has written on topics as diverse as David Bowie, religion, and suicide. As moderator of The Stone at The New York Times, Critchley asks philosophers to weigh in on contemporary issues in art, literature, politics, and popular culture. Additional information about Professor Critchley is available at his personal website.

The dialogue with professor Critchley, devoted to his book, will engage phenomenological, aesthetical and moral approaches, and will be hosted by Oana Șerban, Executive Director of CCIF and professor at the Faculty of Philosophy, University of Bucharest.

“It is an honour for us to have Professor Simon Critchley as a special guest of our cycle of conferences. Our dialogue will be inspired by some leading questions concerning his phenomenological reading of sport in the key of a poetics of soccer, his socialist considerations on the nature and experience of soccer or his implicit presuppositions related to the morals of football. I think this is a book that should be read by any philosopher who takes into account seriously the need to leave the Ivor Tower and turn philosophy back to society as a hygiene of life and an aesthetics of existence, in order to understand how vital is our professional engagement in philosophy and how it can support the understanding of power and competition in different strategic contexts, such as culture, sports or management.” (Oana Serban)

The conference will be broadcasted by the official channels of our faculty and university, including YouTube and other social media accounts. Stay tuned Monday, April 19, 2021, at 7PM. 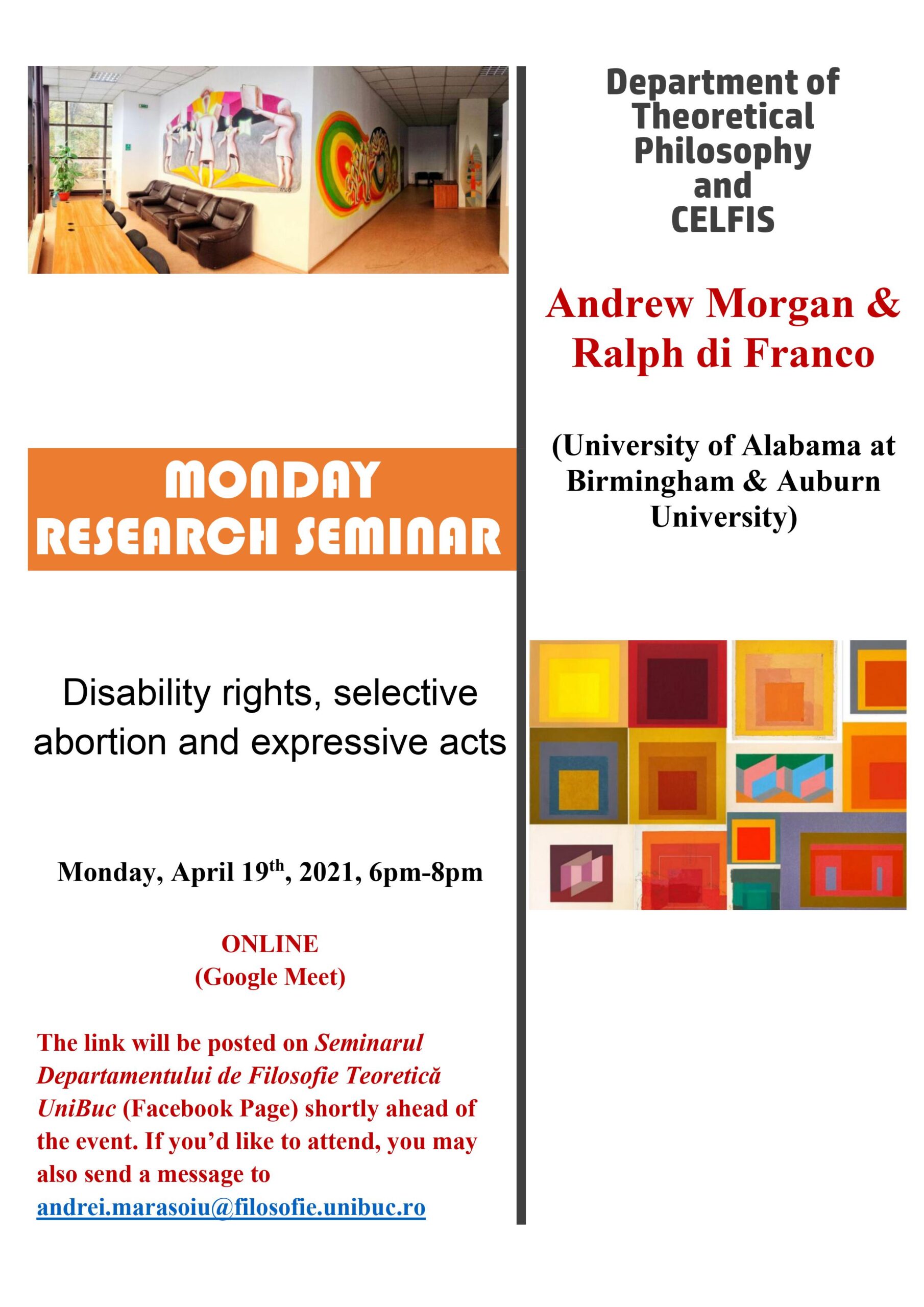 ‘In this talk we will examine recent attempts to revive the disability rights critique that prenatal testing and selective abortion send harmful messages to the disability community. Our thesis will be that a few careful moves could help this “expressivist argument” to avoid some common criticisms. First, prenatal testing and selective abortion should not be uncritically grouped together. The reasons parents engage in prenatal testing are numerous, making any “message” this practice sends highly indeterminate. In contrast, the reason parents engage in selective abortion is (by definition) very specific: it is because, and only because, the fetus has a disability. Secondly, while it is difficult to justify the claim that individual acts of selective abortion send messages to the disability community (given that these procedures are not usually a matter of public knowledge), it does seem plausible that these acts can often involve manifesting a derogatory attitude towards individuals with disabilities. We conclude with some suggestions for how private expressive acts can inherit the moral defectiveness of the attitudes manifested.’

After Justice: John Rawls’ Legacy in the 21st Century – CfP

“Justice is the first virtue of social institutions, as truth is of systems of thought.”

2021 marks the centennial of John Rawls’s birth and the 50th anniversary of A Theory of Justice’s publication. Rawls’s role in reviving substantial normative interrogations in political philosophy has long been acclaimed by moral and political philosophers, as well as by economists, political scientists, and legal theorists. Even while Rawls himself was rather reluctant to engage directly with ongoing critique of, or answers to, current events, much of the scholarship that he has inspired has massively extended his conceptual distinctions and insights, lines of argument, justificatory structures, and vocabulary, to cover increasing domains in the humanities and social sciences. Our conference explores the legacy of John Rawls and the various ways in which his philosophical thought can be used to understand the transformative political events and crises of the contemporary world that have brought a renewed set of interrogations and have changed the social and political landscape.

We welcome all paper contributions addressing Rawls’ philosophical legacy, but are especially interested in the following range of topics:

The abstracts should be no longer than 500 words (including 4 to 5 keywords from the list of topics above) and should be sent to the following address: 100Rawls@filosofie.unibuc.ro. Please indicate your institutional affiliation alongside the abstract.

Due to the Covid-19 pandemic, the conference will be held online.

Global Justice Seminar, November 6, 2021: A roundtable on how to achieve fairness in the global COVID-19 vaccine distribution conducted by Thomas Pogge (Yale University). 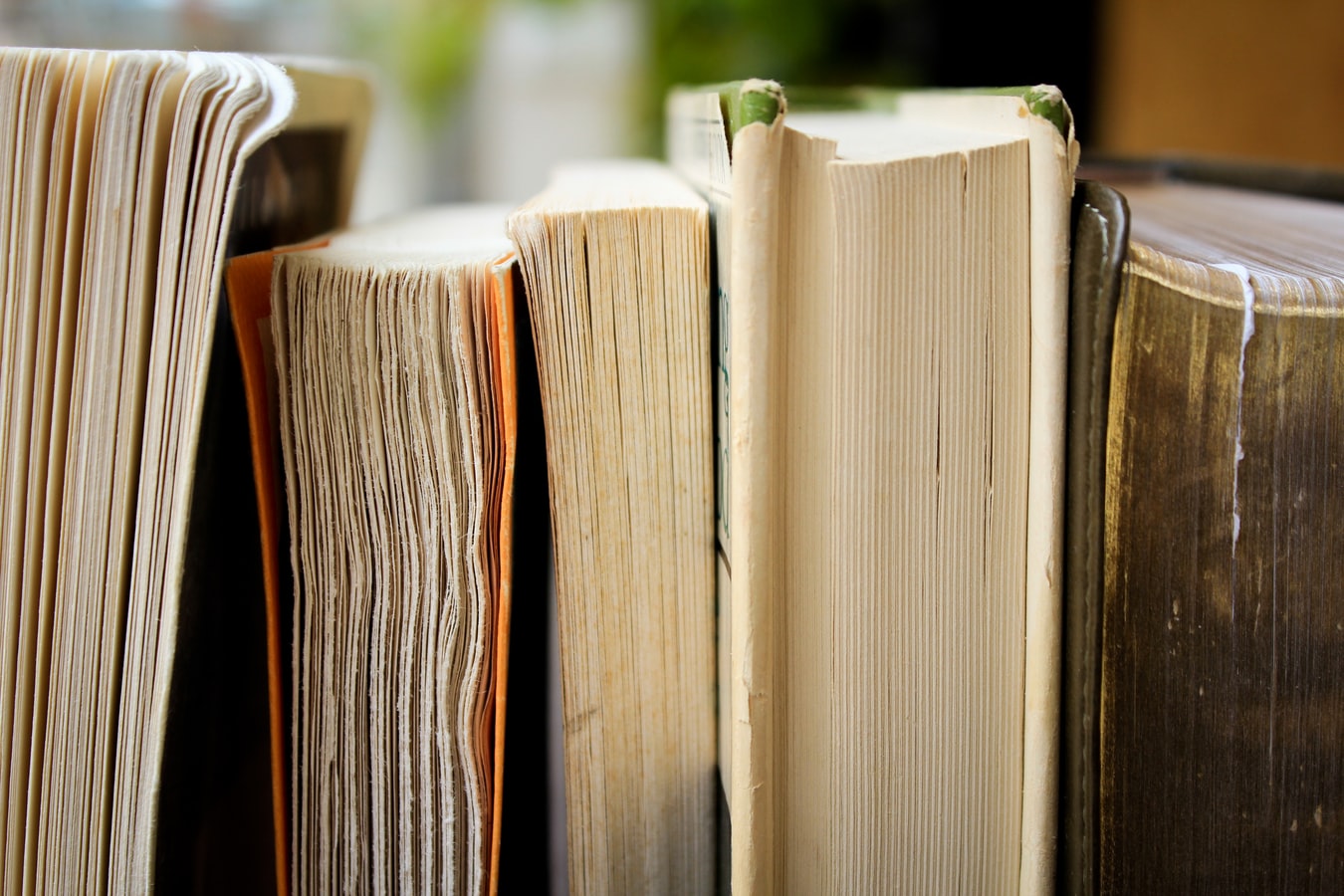 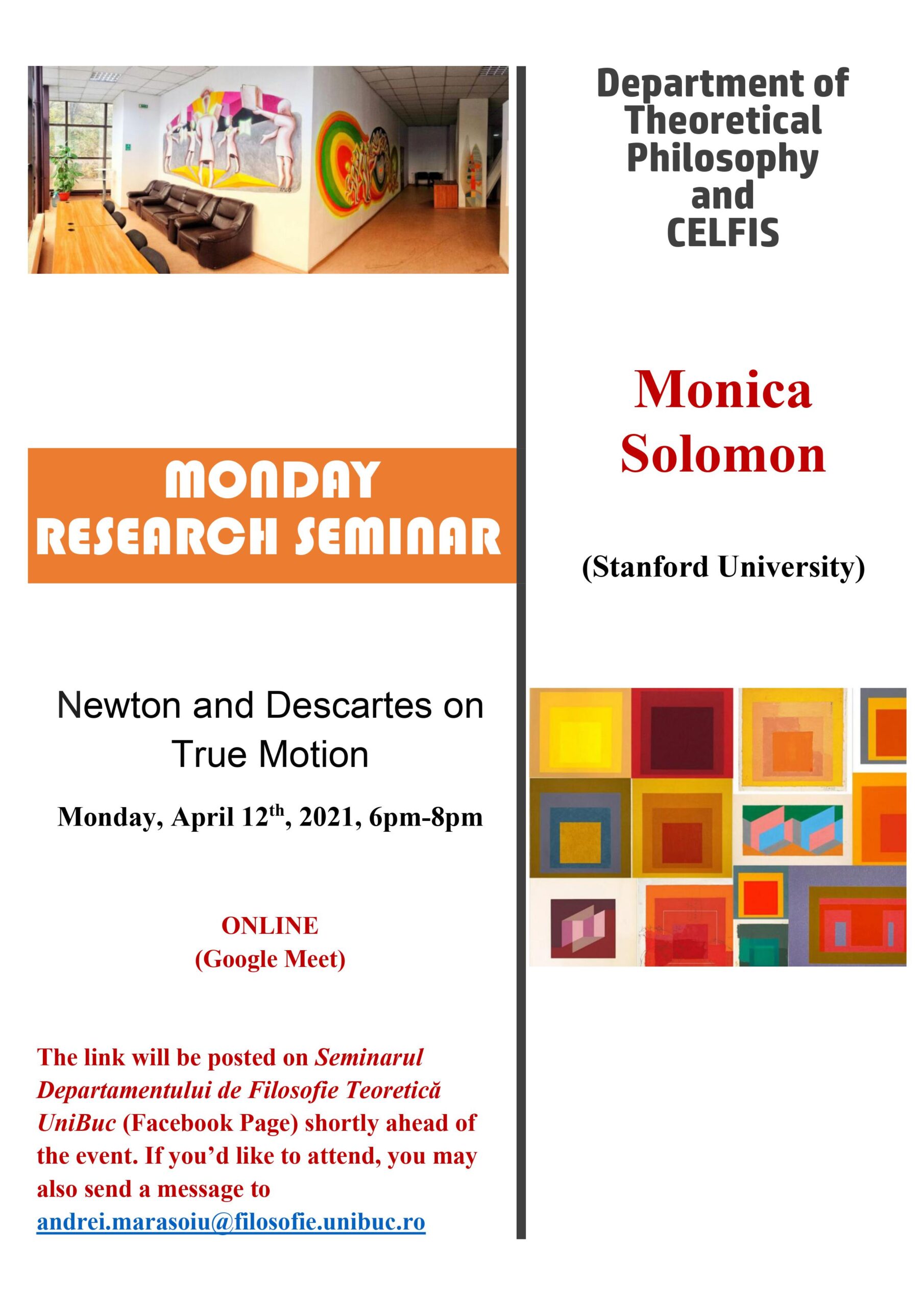 ‘Isaac Newton’s scholium to the definitions in the Principia (1687/1713/1726) articulates clearly distinctions pertaining to the concepts of time, space, place, and motion. A well-known example therein describes the motion of the water within a revolving bucket. Trivial as it may seem, the example has captured the imagination of philosophers ever since. Recent work in the history and philosophy of science has revealed that the example is best read contextually, as an argument against the Cartesian definition of proper motion.
In this talk I make the further argument that what is truly at stake is finding a quantitatively adequate measure of true motion. The example is not an argument for the existence of absolute space or motion, and the attack against the Cartesian framework is both more substantial and more targeted than it has been previously shown in the literature. This conclusion will then lead us to reconsider the role of the scholium: I suggest that it is a commentary to a set of fundamental physical quantities, and a “space-and-time” scholium only derivatively. Finally, I am going to develop the implications of this analysis for Newton’s methodology of science and its later reception in the eighteenth century.’ 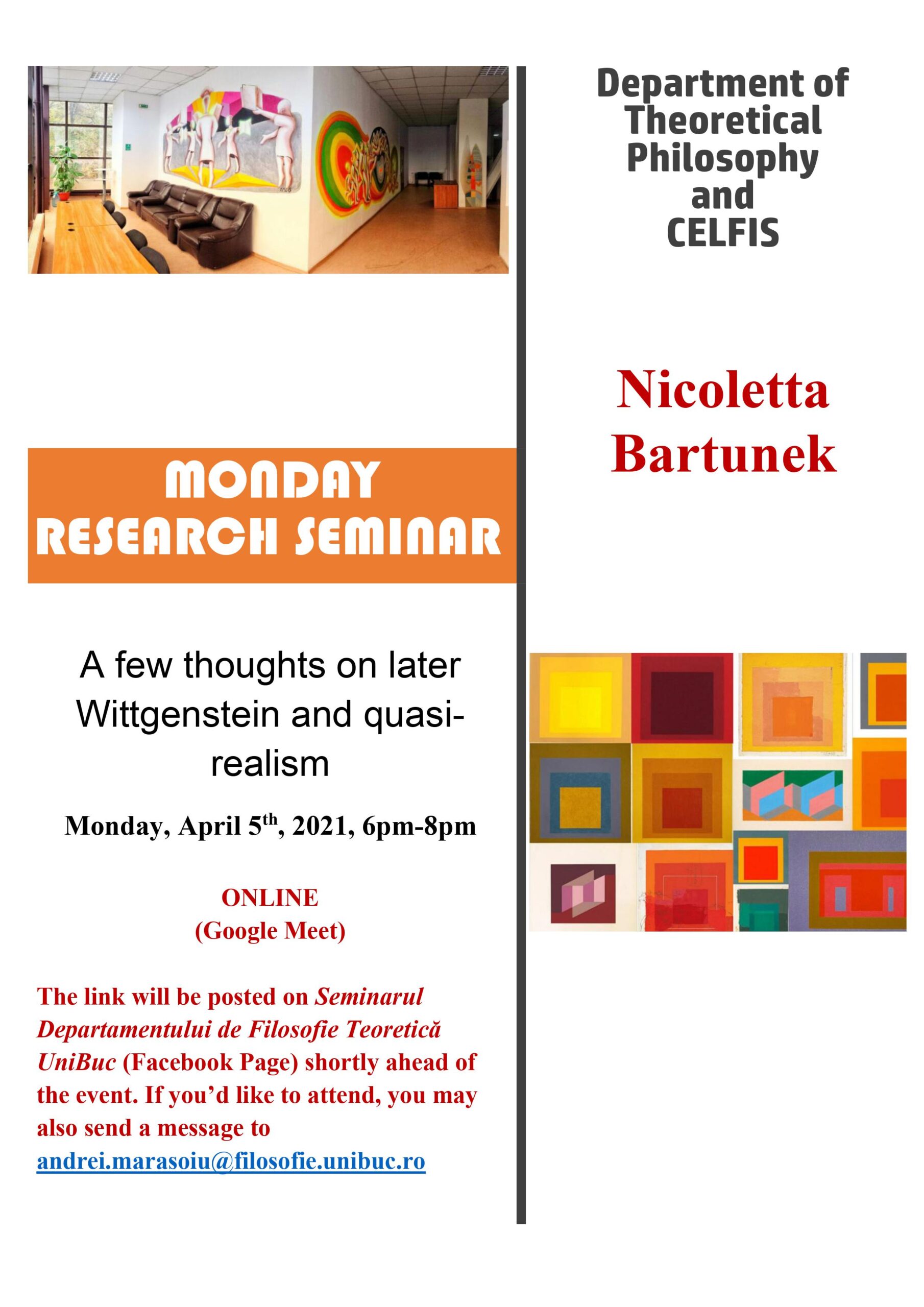 ‘Roughly, there are three main ideas underlying Blackburn’s quasi-realism: that moral statements do not represent facts or properties (1); that such statements „project our sentiments” onto actions – they are best seen as „attitudes” – (2); finally, that moral statements can be said to be true or false, and they can be embedded in conditionals (and in the logical calculus in general) (3). And Wittgenstein seems to agree with all of these. Indeed, he stresses (1) as soon as the Tractatus and there is no reason to think he changed his mind about it. Moreover, he later links the status of ethical terms to those of avowals and gestures of approval and disapproval – as the quasi-realist does at (2). Concerning (3), Wittgenstein prefers to avoid “truth” for non-descriptive statements, but he acknowledges that relying on it is not misguided.

This presentation will defend the proposed juxtaposition from the following two counter-arguments. Firstly, that Wittgenstein abandoned the topic of morals and ethics in his later philosophy, making (2) implausible. Secondly, against (3), that Blackburn advocates for a separate semantics for ethical and moral discourse, and this is thoroughly unwittgensteinan. My claim on the first account will be that Wittgenstein’s idea that „meaning is use” can very well cover the disputed topics. On the second, that Blackburn himself changed his mind about the workings of his project: the stated purpose now is to give a Wittgensteinian perspicuous representation of morals. And Wittgenstein’s views about truth not only confirm Blackburn’s (3) but can enrich it greatly.’