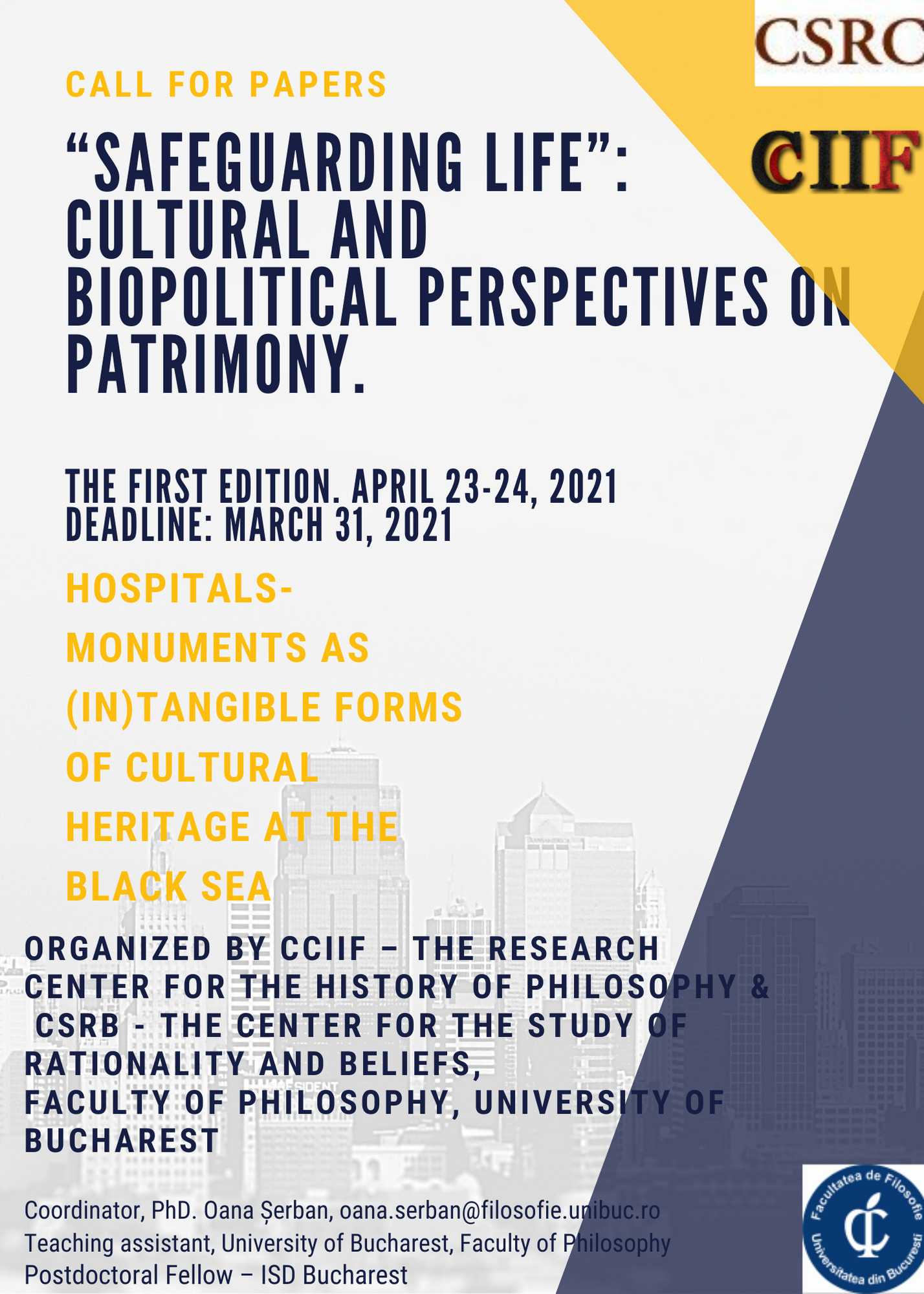 Nowadays, representatives of different working groups belonging to the European institutions and commissions responsible for culturally regenerating the Black Sea insist on developing networks of museums, cultural sites or other cultural agencies such as festivals, in order to strengthen the partnership between the states that border this maritime area which needs a powerful and renewed branding.

There is no transparent effort in addressing hospitals that are placed into historical buildings as part of the cultural heritage of the Black Sea, nor any intention of insisting on their potential to be reliable candidates for inscription in the UNESCO’s World Heritage List.

The Black Sea coast is recognized for its balneary potential but health is never addressed, consequently, as a form of cultural capital whose resources and practices correspond, from their material order, to a set of intercultural comprehensive values, inherited rituals and medical knowledge. Such medical rituals lay at the core of local and national “cultures of health” that might be proposed, as well, for inscription in the UNESCO`s Representative List of Intangible Cultural Heritage

TOWARDS A NETWORK OF HOSPITALS-MONUMENTS ACROSS THE BLACK SEA

Relevant examples of hospitals-monuments can be tracked across the Romanian territory.  The Clinical Hospital of Nephrology Dr. Carol Davila, in fact, the only institution in Romania with this profile, is one of the most impressive local buildings made in neoclassical style, inspired by the model proposed by “Ospedale di S. Lazzaro e Medicanti” in Venice. Colțea Hospital, established 300 years ago, was one of the first European medical units with a social-medical mission, finding a similar format in the “Charite” hospitals in Berlin and “Guy” in London. Behind the walls of these monuments, the clinical protocol functions at high standards of excellence and performance, the last-minute medical technology being used without undermining the heritage value of the building. Sometimes, the protocol of medical recovery found correspondent practices on the Black Sea coast, whose waters have been prospected as a cure for rheumatic, nervous and arthritic disorders. As a national example, in Eforie Nord, under the patronage of King Carol I, a health resort sprang up at the end of the 19th century; nowadays, the resort is well known for the curative potential of the sapropelic mud and represents a strategic area of the Romanian Black Sea coast.

In what concerns the possibility to create a network of the hospitals-monuments belonging to the states across the Black Sea, some important historical buildings should be considered for inclusion. One of them is the building of the Russian hospital from the coast of Sevastopol, named after Pirgov on Pavlovsky cape; the city hospital of Krasnodar, built together with a complex of buildings of the poorhouse and a church, in the first part of the 19th century; the former hospital of Kavala during the Balkan wars, currently functioning as the male high school; the old hospital of Izmail, registered as a historical monument, or Museum of Health and Sultan Beyazit II Mosque, from Edirne, built in the XVth century.

On the one hand, history reveals that many of the monumental buildings of these hospitals have initially been designed and intended for military, ecclesiastical or educational functions, being subsequently converted and adapted to the medical protocol.  On the other hand, the buildings of cultural heritage that could not be preserved or restored according to the clinical protocol, changed their function, being adapted to educational or commercial spaces. In the process of conversion, the cultural identity and memory of the heritage buildings were compromised or lost, along with the correspondent elements of intangible cultural heritage. Therefore, it is urgent to develop conservation and restoration policies that pay equal attention to the dynamics and the functionality of these monuments throughout history, without neglecting the local or regional priorities of safeguarding such buildings of cultural heritage.

Addressing the right concern to such institutions that perform both tangible and intangible forms of heritage following cultural patterns specific to the Black Sea means healing this area from its one of its most benign diseases: a political, economic and educational underestimation of health as a fertile, cultural resource.

We invite scholars to submit their valuable contribution to this conference. Philosophical, cultural and political approaches are encouraged. Abstracts (max. 350 words) and a short professional biography (400 words) are welcomed no later than March 31 2021 April 10, 2021. Authors can submit applications to the following address: oana.serban@filosofie.unibuc.ro.

This conference is organized by CCIIF – The Research Center for the History of Philosophy & CSRB – The Center for the Study of Rationality and Beliefs (FACULTY OF PHILOSOPHY, UNIVERSITY OF BUCHAREST).

Scholars that will take part to this event will be asked about their disposal to join a research network devoted to the analysis of tangible and intangible forms of cultural heritage inspired by health as form of cultural capital across Europe. Potential mechanisms for financing this research will be discussed after the conference with those interested in developing such a project.

For any additional information please do not hesitate to contact us by email: